These healthy snacks are perfect for keeping those munchies at bay or to roll you over until dinner time. I don't recommend dried fruit or store-bough smoothies as these tend to be pretty calorific and sugary, with false claims healthy-wise.

2) Apple and peanut butter biscuit.
I use the word biscuit to loosely describe these. This is higher in sugar but extremely filling and simply delicious. Start by coring an apple (pink lady go best) and then slice this horizontally into approximately half a cm pieces. You should have around 8-9 circles of apple with holes in the middle. Now spoon out a serving size of peanut butter, or replacement peanut butter in my case, and spread this oven the top of half the slices. Use the other half to put on top, creating mini sandwiches of apple filled with peanut butter. SO GOOD <3

An oldie but goodie. Bananas taste the best but are highest in calories so opt for either berries, or pear for this one. If you're feeling a bit extra you could always sprinkle with seeds, great for satiating hunger and delivering omegas.


4) 1/4 avocado on slice of brown bread.
Avocado seems to be a pretty big fad at the moment, sprinkled over people's instagram account as much as Kylie Jenner's derrier but maybe it's so popular for a reason? It is high in healthy fats, satiating and contains essential nutrients and minerals. Sounds like a winner to me! Simply mush some over brown toast (we aren't bothered about presentation here) and you're good to go.

5) Vegan vegetable burger.
I buy these frozen so that I always have them in. They're typically a dinner staple but you'll find that most are under 200 cals so just have a shop around for one you like, and they work just as well for a post gym snack to keep you full.

6) Banana, soya milk, berry and cinnamon smoothie.
If you have a blender, this is super easy. Slice 1 banana and put in the blender. Add 200ml soya milk (Alpo light tastes frigging gooooood) and 1 cup strawberries/blueberries/blackberries/raspberries then sprinkle in 1 tsp cinnamon powder or if you're not a fan of cinnamon you could add a flavour of your choice such as vanilla. Blend until smooth and if it's not the consistency you want then add water as necessary.

7) Spinach, pear, soya milk and banana smoothie.
Less sugary than the one above, this is even more filling and nutrient dense. Pack your blender with 2 handfuls of baby spinach, 200ml soya milk, 1 chopped banana and 1 sliced pear. Blend and you're done! Don't add water to this one to change the consistency sit can go a little funny, just add some more soya milk :)

8) Sweet potato paprika/salt crisps.
You can make these and store them for a couple of days for a travelling snack to take to work or university so you're not tempted to buy junk food and can proudly whip them out of your handbag.
Preheat your oven to 120 degrees C. Wash and dry as many sweet potatoes as you think you'll need (1 potato=1 portion) and uniformly slice them as thick or thin as you'd like. I wouldn't go thicker than half a cm as they won't keep as well when you store them. Now toss on some olive oil to lightly coat them and sprinkle either with park or table salt, not too much salt though as it can be bloating. Now bake for 2 hours or until golden and remove from oven to cool. SCRUMPTIOUS! 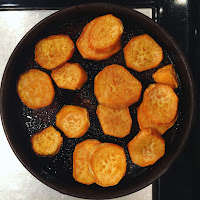 9) Wholemeal apple muffins.
See this as a separate recipe on my blog as it's a bit long to type here!

10) Oat mug cake.
Simple as anything, this is a real treat without overdosing on sugar.
In 1 large mug stir 40g wholegrain porridge oats, 100 ml soya milk, 2 tsp plain cocoa powder and a drizzle of agave nectar or ordinary golden syrup.
Now microwave on full for 30 seconds, then on 15 second bursts until at a consistency you like.
Posted by Helen Mortimer
Email ThisBlogThis!Share to TwitterShare to FacebookShare to Pinterest