So I feel the need to explain how I ended up going out to push myself this morning on my first 'serious' run back after so long being injured. I spent the majority of yesterday evening in tears after kinda cracking after hearing some pretty upsetting news from someone, getting yelled at by that same someone, then suddenly thinking about my dad after all that and just losing it. I guess my barriers broke down and it all just came out. I can only be cheerful 99.9999% of the time I'm afraid and I'm OK with losing it occasionally.

I'm the type of person who likes to push myself maybe a little harder than necessary, so naturally, after being told by the Physio on Monday that it would be OK to start building up my milage and that
I was allowed to run on this injury, decides to go out and see how far I can still run. And I'm pretty proud of my efforts too, considering calf cramp, no water and needing a shit the whole way! I turned off Strava once I realised how lost I had become and that I should probably start actually concentrating and asking people for directions before I got too dehydrated and lost phone charge. 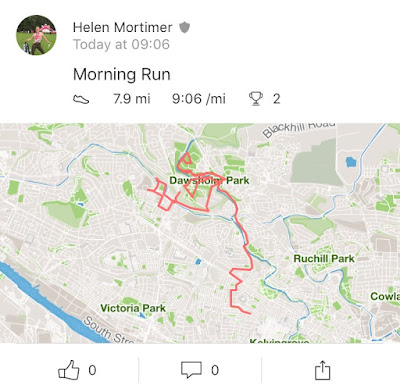 I won't take you through the route I did as some of you won't know Glasgow too well (apparently I don't either), but I got to leap along with a river for a significant chunk of the first half and hit the trails around near that. The second portion was majority road, although there was a canal path that I ended up on for a while too. Wearing road runners was not my best plan, but I'm pretty much limited on my options when it comes to footwear these days, and I should really invest in some Hokas or something...anyway!


After being told by a girl carrying her yoga mat with her up a hill that I'd been heading in the wrong direction for a couple miles, I lost heart a bit and realised it probably wasn't overly sensible to bang out a half marathon my first run back, so I spotted a guy getting into his car while I was hiking up a small back lane just off a main road (I still don't know where this is). He told me I was way off from where I could even locate, a couple miles out from home, but that he was heading to just a few minutes away from where I live, and that I could hop in if I wanted. I uhmed and ahed about this for a little while, with the voice of my furious mother popping into my head, outraged that I was disobeying probably one of the few pieces of advice she'd ever given me, and a pretty basic life skill of not getting into cars with strangers. But at this point my calves were not up to the struggle of 5 miles home and he seemed nice enough! Had a cool beard too.

So I get in and managed to learn so much about this man in the 15 minute journey I can't even... he's an artist nowadays, and studied at Paisley University which he does not recommend. His 30s were a 'right-off' as he put it, with some personal struggles and pretty much trashing his body, which he showed me, can do some pretty weird things. He was off to Physio in the afternoon for his hyper mobile joints, which means he could bend his fingers all the way back, pop out his shoulder blades to make it look like he had wings and do all sorts of funny things with his neck. The 30s had also blessed him with a split tongue, where the two halves he could make loop together! His 5 year old daughter was at school locally, and his 40s are a turn around era for him, having some what reformed from the past. He was truly lovely, and I can't thank him enough for saving my butt out on that run and dropping off outside my favourite supermarket (Morrison's) where I stocked up on recovery fuel (biscuits).

AND THIS IS ALL BEFORE MIDDAY. What a morning ammiright.

My hip held up pretty well throughout, although I guess I'll see how it feels tomorrow. Gotta make sure I foam roll like crazy this evening and drink enough water etc after that body shock. Can't say road running is my favourite as I really feel is hammer my body with the impact. 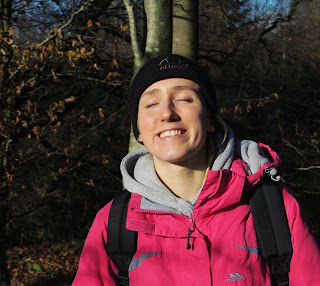 Hope this inspires you to get out and run. Smile at people and be kind on the trails, you'll meet some interesting folk :) xx