So I just recently started back running after 4 months of injury (hip Tendinopathy) and am trying to take it slowly and gradually get back into things, although as any previously injured runner out there will tell you, theses always easier said than done. The first thing I noticed immediately after my first 5km back was that my calves were totally killing me! I finished the run feeling very tight in the muscles to I stretched and foam rolled them out but the next day, Lordy lord. I finished my maths lecture then held everyone up in the stairs because my calf muscles physically could not function down each step! It was the type of burn that's great because you know you did something, like you used to get when you first got into fitness but it took me out all that week because the lactic acid just wouldn't clear, no matter how much cherry juice I consumed!

What I realised, while I seem to have maintained all my aerobic fitness and quad/abdominal strength while cross training all that time, I forgot all about my calves and that they weren't getting trained at all. I may have done the occasional set of heel raises but that was pretty much it, so the muscle loss that area must have suffered over such a long break was huge, hence why they were paying now.


So I got online and ordered myself some compression socks as my obsession with watching running related videos on ultras and marathon training etc finally paid off. This particular tip was from Sage Canaday (go check him out immediately, very cool guy), who said he uses them after his runs to help promote blood flow and recovery to his muscles. I'm sure you must have seen people wearing them an numerous races too, which is a clue to the fact that they must actually do something if so many people are using them. I decided to test them after my first interval training session on the treadmill with a friend, which I'm not totally convinced I should have been doing since I'm supposed to take it slow, but hey ho I went for it.

I put the socks on straight away getting changed in the gym after our session, walked home in them after then sat eating and stretching for the couple of hours following that. My calves had been pretty sore from the last run still and got a hammering in my workout, so I have to say I think the socks did a great job. Not only did they keep my legs warm and supported, but even now when I've taken them off I'm feeling better than when I went into the workout (this is the next day by the way). So I'm gonna give this method of recovery a big thumbs up :)

The pair I purchased are Rymora, purely because they had good reviews online and were reasonably priced. I'm not too sure how much of a difference the brand would make as essentially they are all doing the same thing, but do make sure you look at the company's size chart before purchasing as the level of compression you get will obviously be affected. 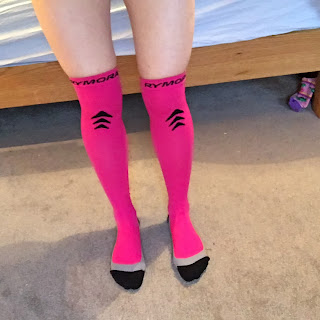 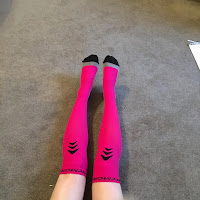 Hope this was helpful to any of you considering a pair of compression socks, or wondering why you see so many among the running community!! :)

A WEE NOTE ON THE SCIENCE FOR THE CURIOUS

After testing them and experiencing such a difference, being a physicist I decided to do a little research on exactly was going on when I wore them. I only read a few very simple articles but I got a basic grasp of the concepts.

Our athletic performance when running primarily relies on muscle strength and aerobic fitness (how well we are transporting oxygen around our bodies). What these compression accessories are doing is improving the muscles' ability to increase the flow of oxygen around them, which is what clears away the lactic acid (the stuff that burns and ultimately makes us stop). So wearing them during your run will reduce the impact of the sport on your body by 'holding everything in place' and boosting blood flow to the area which is how we get our energy, then if you decide you only want to wear them after your run, they again boost blood flow to transport away the lactic acid your body has just produced after a tough run which allows you to recover much faster because the 'bad stuff', the lactic acid has cleared by the next time you go out. Lactic acid is exactly what it says on the tin. An acid. So this can cause our muscles to break down if we don't hydrate properly and don't take appropriate time to recover.

Runners as a group have a pretty obsessive nature, so these can definitely be used to help you get back out on the trails (or roads if you prefer!) as quickly as possible after each workout and I'll definitely be continuing to utilise them myself!

PEACE OUT XOXX
Posted by Helen Mortimer
Email ThisBlogThis!Share to TwitterShare to FacebookShare to Pinterest