5km to half marathon in 2 months

When I first took on the challenge of training for 3 half marathons all within 2 weeks, with only 2 months of training time, you won't be surprised that I was on the receiving end of quite a few odd looks and general discouragement from peers and family alike. This could partly be due to the fact that I could only run up to 5km at the time having gotten lazy with fitness training and not having continued with my football team throughout having a gap year. And I suppose these were reasonable reactions
.

The most common question I got asked was 'why?'. And I'll now admit that I lied with all of my answers. I told them it was to raise money and awareness for my chosen charity SPANA, which is of course partly true. SPANA is a working animals abroad charity whose aim is to treat, train and treat, which means they offer vital veterinary treatment for animals such as donkey and oxen and teaches the people whose livelihood depend on those animals on how to properly care for them. However, this wasn't the main reason I took up the challenge. I decided to run because I was bored. It made perfect sense to me...I already knew I enjoyed running, even if only 5km at a time, I needed a new challenge after becoming a lifeguard in February and having worked for a couple of months and it was an opportunity to raise some money at the same time. A no brainer right?? 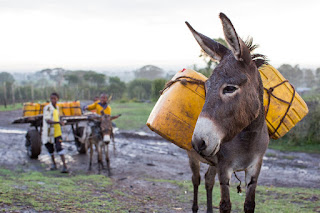 Who wouldn't want to raise money for these guys if they could?
After shamefully spending a week of valuable training time googling phrases such as 'running techniques for beginners' or 'the diet of an athlete' I snapped out of my fear coma and decided just to take the plunge. I was going a run. I'm fortunate enough to live in Kent where there is no lack of green space to gamble about in without being overtaken by every other jogger on the street and where my lack of bladder space isn't such an issue (there are plenty of bushes) so I tied up my Nikes and set out to the nearest forest. I'm proud to say I managed 9.8km on my first run, which I tracked with an app on my phone (found in my week's research) and returned home extremely full of myself, although with extremely sore feet.

The next day, now more motivated than ever, I visited a running shop in my nearest town to purchase some ''proper'' running shoes. Little did I know these would cost me £110 and my dignity of having to run in front of the sales person on a treadmill while a looked around the shop walls plastered with his running numbers from countless marathons and ultramarathons. I told him of my endeavour, and although received encouraging words of advice, left a little deflated.

Throughout the 7 weeks that followed I learnt to pace myself for distance runs and really push myself with two sessions of sprint training per week. I combined this with the occasional gym session and fast paced 4 km run and in general winged it a bit, all the time keeping faith that I would make it to that finishing line. I recruited a gym instructor from work to train with me a few times enjoyed taking his advice on how to increase my fitness in a short time. If any of you want to read the training methods I followed, the framework of it was on the Nike running website which is full of helpful tips.
I ran one distance run each Sunday, increasing the mileage each time until the week before race day I was up to 10 miles and this was a push. I was surprised to find how quickly my fitness was already improving and how much I enjoyed pushing myself to sprint up the last hill or hold my plank those 10 seconds longer. The endorphin rush and confidence which came with it made it worth it.

Receiving my race pack in the post the week before was all I needed to nudge my motivated brain into gear and accept that I was doing this because I wanted to, not because someone had made me, and I was lucky enough to be part of a large, supportive event. Accommodation for the night before booked (the race was 5 hours drive away) I focused on chilling out and getting enough sleep the two days before....

If you guys want to know more, I'm gonna post about the event itself and how I did xx Belles
Posted by Helen Mortimer
Email ThisBlogThis!Share to TwitterShare to FacebookShare to Pinterest
Location: Paignton, UK