My father and I set off for Paignton (5 and a half hours away from us) the day before the race, with accommodation booked only a few minutes walk from the start line, and self catering so that I could manage my allergies instead of trying to find somewhere to eat out as this is near impossible. We arrived in plenty of time and immediately set off exploring the route, sussing out the torture which lay ahead for me. Torquay is beautiful if you ever get the chance to go, set right on the coast with scenic hill views and lots of entertainment through out the town. We spotted a few signs along the road explaining there would be closures due to the runners the next day and figured this must be a pretty big event if we get to feel important enough to block traffic. Being my first ever running event I really had no idea what to expect or how many people would be taking part.


After a brimming bowl of pasta (which I read you should eat the night before) and a healthy portion of vegetables I fumbled with my alarm trying to ensure I set it to the right time, because it would be exactly like me to miss the start or not have enough time to stretch. The race started at 9.00am so a 6.30am start gave me plenty of time to fuel up and cover myself from head to toe in sunscreen if needs must. Listening to my father snore like a pig on amphetamines in the adjacent bed didn't exactly help my beauty sleep along but after hitting him with a pillow a few times through the night to ensure he got the message I ended up with a relatively rested start to my day. I'll admit I had an ''upset stomach'' due to my nerves, otherwise known as the nervous squits in my family.  This was the least of my worries as a rushed to prod myself with pins, trying to fix my race number to the front of my newly bought Nike running vest (clothes shopping was the perk of my new hobby) and gulp down enough coffee to keep me awake but not so much that I'd have to pee every 5 minutes.

Eventually making it to the start line, I overheard someone explain that there were 2000 people taking part and we needed to be realistic about what position we took in the starting line so as not to get in people's way. I hurriedly made my way to the rear end of the crowd, seeking out people who I felt comfortable running with, meaning I felt I looked much fitter. However the first thing I came to learn as the race progressed was that people's image should have had no impact on how well I thought they could run. Whether they were short, fat and balding held no resemblance to the fact they overtook me with an ease and grace that only fell short of a gazelle, and I soon realised it is the training everyone has put in, not natural athletic ability that determines who comes out on top.

When we approached the far end of the first lap, an entourage of music greeted us, drums beating and even an Elvis Presley impersonator screeching out Heart Break Hotel at the top of his lungs. The atmosphere pushed me on enough to overtake some of my pace makers and return to tackle the single long hill with renewed enthusiasm. There was shouting behind us from the marshals making a clear path for the elite athletes who were already lapping us by the time I was a mile from where we started, and I glimpsed what I can only describe as an athletic God sprint past me, barely sweating even at double my pace. This eye candy kept me motivated for quite some time.

Cheered by my aunt and uncle twice along the course, I continued with my set pace through out, only walking to drink water twice at the stations. And until 15 km out of 21km I was actually enjoying myself, watching the world go by. But then began a sort of mental struggle, where I began to realise how sore my feet were becoming due to the pounding of the pavement and that I would be running at least another half hour at this rate. I knew that I couldn't walk or I'd never start running again and it'd take me even longer to finish so I decided to push through and find my energy reserves to carry myself that much faster. The mood seemed to lighten in me as soon as I made this decision, along with the fact that I knew family was waiting for me at the finish and we had a nice day planned of touring the area.

The last 200m stretch I managed a sprint which everyone seemed to be doing by this point because we could almost taste the finish line, and I cheerily went to receive my goody bag and banana. I had read that having flip flops in your bag to put on after a race was good, and I'm so glad I listened because it felt great to remove my sweaty trainers and paddle into the sea afterwards to cool my feet.
I experienced serious soreness when descending stairs for the next few days and was acutely aware that I had the next race in only 6 days but I can honestly say I was excited to take part in another event like it 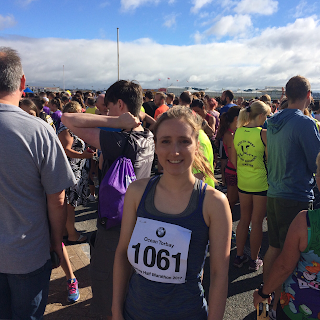 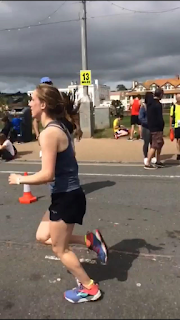 What's your experience with running events and training?
Belles xx