This is ideal for those mornings where you've woken up with plenty of time to get ready for your day but not so much time that you want to go all out and make scrumptious pancakes or even more exotic, acai bowls. This should take you no more that 10 minutes to prepare and it very yummy! 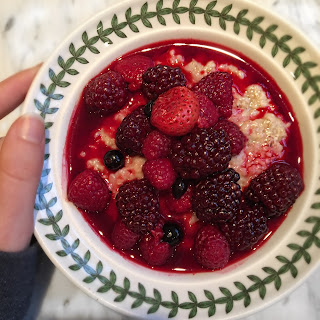 40g wholegrain oats (around half a cup)
1 cup boiling water, although if you like a creamier taste, use half soya milk, half boiling water
3 tsp cinnamon powder
1 cup fresh/frozen berries or fruit of your choice
Half cup yoghurt of your choice, I go for plain soya because I don'y like too much sugar in the morning
Optional: A few drops of vanilla

Pour the oats, boiling water and soya milk into a pan and bring to a simmer but stir continuously so as not to let it stick to the pan of clip. This should continue for approximately 4 minutes until some of the water has evaporated and you have a thicker consistency. It's up to you how thick you allow it to get. Now stir in the cinnamon powder until you have an even distribution. If you are adding vanilla flavour then add this at the same time as the cinnamon.

Pour your mixture into a bowl and add the yoghurt to the top after allowing it to cool for a minute or so. You can either stir the yoghurt in to make the entire thing creamy, or enjoy it with the fruit at the top. Add the chopped fruit/berries to the top (if you're feeling really cheeky you can drizzle some syrup over the top) and voila! Now was that easy or what.

Let me know what you think, Helen xx
Posted by Helen Mortimer
Email ThisBlogThis!Share to TwitterShare to FacebookShare to Pinterest