So I'm definitely late to the bandwagon here but I'm gonna hop on anyways. For those of you who don't know, Courtney Dauwalter, 33 from Minnesota is the absolute beast (from the East (sorry, very English joke)) taking the ultra running world by storm (that pun wasn't even intended, I'm on fire), although I feel the term Ultramarathon in this context may need redefining as Court's latest exploits involve not a 100 miler, not a 200 miler, but a 238 miler which she won over 10 hours in front of the next runner. Just try and wrap your head around that for a minute...


I can't describe the instant love I felt for this woman when I came across her, while actually watching a video on youtube by another runner, Lucy Bartholomew, also very successful, on Western States 100. The controlled facial expression and gritty determination written in the way she ran caught my attention, and then the obvious fact that she won it. The more I looked into what she's been doing for the sport and her sheer laid back style to life, which can sometimes be lost in these types of world, really captured me. I infect ended up shoving a video interview of her in my boyfriend's face and exclaiming ''THIS IS WHO I AIM TO BE". Not a crazy stalker at all... don't know what you mean. But you know what, no papa nada, because I think she's the real sh*t and I want the world to know it. NO SHAME!

Growing up in Minnesota, competing in cross country running then skiing throughout high school, and continuing to ski through college where she studied biology (which she later taught), I suppose you could say she already had a competitive edge and mental toughness. She describes her upbringing as having given her a mindset of not quitting. Whatever you set your mind to or want to achieve, her belief is you go for it and you don't stop until you get there. In her case, literally.

As an example of her grit and perseverance, competing in Run Rabbit Run 100 2017 she noticed her vision close in at 12 miles to go then completely disappearing at 10 miles to go. The natural reaction for most would be to drop out and call it a day, but stumbling her way to the finish line with a bloody face after falling multiple times in her blind trail run to the finish she took 1st place, again by a decent amount of time. Her mental toughness, and possible borderline insanity shines through here.

To be completely honest, there's a total lack of information regarding Courtney herself to be found anywhere on the internet, although a wealth of info on her races and results. I see this as a good thing because it just attests to her nature of running for the love and curiosity of what our bodies can achieve on two feet (or one for some). So the fact she's not spreading herself about too much only shows her character even more. The fun facts I will run past you though are that her favourite sweets (which she apparently devours after ultras like there's no tomorrow) are jelly belly jelly beans, she eats a heck of a lot of nachos and she likes to listen to Prince as a pick me up out on the trails. I won't bother with race stats or results as you can look these up for yourself if you're interested, I just wanted to spread the word that Courtney Dauwalter is totally kick-butt and I love her. 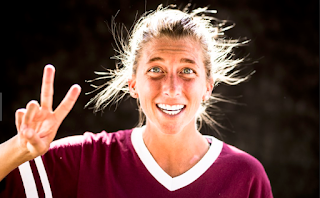 What a happy face. Peace out munchkins, tell me who your inspiration is <3
Helen xox